BoscoUrbano seeks to inspire kids to learn about urban biodiversity and empower them to practice care for their more-than-human neighbours. To do so, it provides an audio tour as well as a booklet accompanying interactive activities.

An On-Site Learning Experience
BoscoUrbano offers tools for a mindful and interactive learning experience on urban biodiversity in DonBosco. And we believe that the most powerful way to learn about this topic is when being fully immersed in urban nature. That is why all of our tools are created to be used on-site: outside.

Think Global, Act In Don Bosco
The alarming decline of biodiversity is a global matter of concern but there are local actors in Don Bosco stepping up against it. And they have a meeting point: the Orto Semirurali Garten. BoscoUrbano seeks to connect this garden and its people to kids between the ages of 8 to 12 years to create a common learning experience.

The Whole Is Greater Than The Sum Of Its Parts

BoscoUrbano shows interdependencies of species. It focuses on five different subtopics (soil, trees, herbs & flowers, pollinators and birds) while putting a strong emphasis on their connectedness. And also humans are a part of nature’s web of interbeing: BoscoUrbano gives input on that matter and leaves space for reflection.

Igniting Spark Through All Senses
For each of the five subtopics, BoscoUrbano combines a) an audio tour with b) practical, interactive activities in the Orto Semirurali Garten and c) creative activities to be done individually. The activities are accompanied by a booklet. That way, different senses are triggered through different channels, fostering a holistic learning experience. 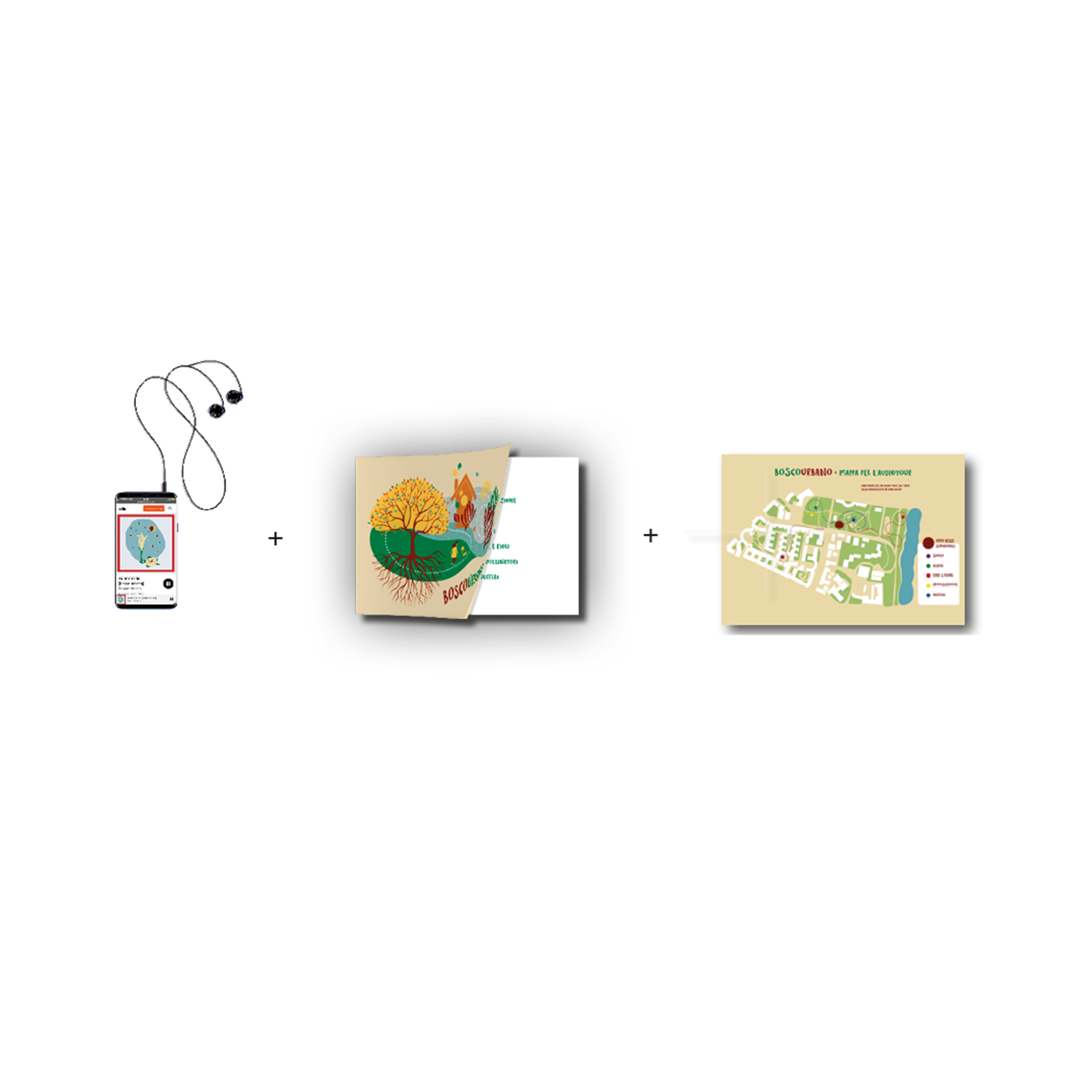 The Research and Design Process
The design process of BoscoUrbano was parallely accompanied by a research. To familiarize with the Don Bosco neighbourhood in Bolzano we begin by doing design ethnography in the area of Lotto C. The main questions at this stage were “which kind of places are there?” and “what is happening?” Our first impression was that courtyard in Lotto C are monoculture grass areas that lack liveliness of both human an more-than-human beings. Additionally there are many prohibition signs there, which impose limits to interaction. Our first matter of concern was the fact that biodiversity is declining. This applies to many urban areas on a global level, but most importantly it emerged as a self-evident fact also in the case of Lotto C. We also discovered the history of the place with its Semirurali houses, a complex of a semi-rural houses with gardens, which have been shared by different families for almost fifty years during the last century. Today there are only three of them left.

As a consequence there came some challenges that led to the actual development of the project: to rise the awareness about biodiversity in the neighbourhood of Don Bosco; to encourage Don Bosco inhabitants to take action to increase and value biodiversity; to create a platform for interaction and interbeing; and to support children with environmental education outdoors.

We proceeded by mapping the green areas with the following questions in mind: “where is biodiversity hiding?” “what potential is there?”
After some exploration walks and familiarization with the green areas we began mapping some local actors and possible partners. We tried to discover “who is interested in Don Bosco biodiversity?” “who has knowledge of Don Bosco biodiversity?” and “who wants to connect with us?” Some of them turned to be Officine Vispa, Eurac Research, Orto Semirurali Garten and Museo delle Scienze Naturali.

It came time to meet the actors and the possible partners. We presented our (rough) ideas to all of them and got in a deeper conversation with the first three. We asked them “what can and what can not work?” They gave us some feedback and inspiration. Together, we opened discussions on the topic and explored different possibilities by questioning “what has been already done in this direction and what were the results?” and “what would be possible in the future?” We wanted also to understand who could be the possible target groups, so we asked ourselves and our possible actors “who could support Don Bosco biodiversity?” and “how to connect environmental education with action for biodiversity?”. The most appropriate target groups seemed to be institutions as local schools, but also Don Bosco inhabitants as individuals.

There followed a creation of connection particularly with Orto Semirurali Garten, a community garden, which preserves the memory of the the Semirurali experience from the last century. At this stage the main questions were “what are your wishes related to the topic of biodiversity in Don Bosco?” and “which possibilities does the garden offer?” We visited the garden and got to know its members. One of the moments that matter was finding out common objectives and similar ideas with the members of Orto Semirurali Garten, which is opening the garden to school kids as a learning platform. The process of approaching local schools became easier through this connection. Moreover, we discovered how the different members of the garden can contribute with their own knowledge.

The main turning point happened in the last stage of the design process. After some meetings and calls with school, we had to face some limits around the feasibility of the project: they had already established their yearly program, which is currently difficult to follow due to unexpected circumstances (pandemic), therefore integrating BoscoUrbano in the program of the current year revealed to be problematic. Encountering this difficulties and not managing to align with our target group’s schedule and bureaucracy was a weak point, also because this didn’t allow us to test the prototypes with them.

For this reason, as next steps, we are considering to propose the project as part of the next year school program or to open it to families as a free-time activity. The main question for this is “how to reach the new audience and how to adapt the BoscoUrbano experience to it?” We still have the possibility to get in a deeper contact with Museo delle Scienze Naturali and we hope this could be helpful in expanding the collaboration network and in finding new channels for reaching the audience.