"Filo Rosso" is a project aimed to connect citizens with the associations that give life to the community of Don Bosco. Through our website and via certain signposts in the neighbourhood, you will find useful information to discover and find the activities located in your quarter.

In order to make them visible, we propose a website and a series of structures that will indicate the activities in the surrounding areas.  This comes from the need to have a platform where users can find all the information they need without having to consult multiple pages or different platforms. With this same goal in mind,  a series of physical elements will give  an entity to this new online presence and help orient the citizens on the streets.

The site contains the information needed to discover and get in contact with each association in the neighbourhood, as well as the possibility of searching for them by using keywords. The site is divided into three categories: an ator page with their main data,  an interactive map showing where they are located in Don Bosco and a page dedicated to the events they provide. 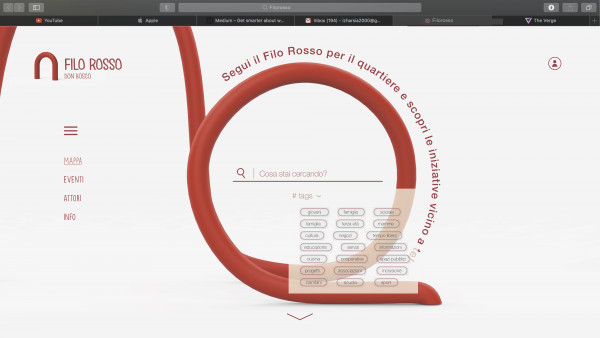 As we were pointing out, Filo rosso will also be present physically by providing for each of the actors a small identification sign located at their door, along with three sculptures displaying a list of the neighbouring associations. All of these elements will be equipped with a QR code linking to the site, thus creating a link between physical and virtual elements.

Our project, like the others in Transforming the City by Care, started with the collaboration of Officine Vispa. With their help, we found out about the many associations present in Don Bosco and they informed us about the lack of flow of information from the associations to the citizens but most importantly, together we noticed how the Civic Center did not supply said information to interested citizens who asked for it as they themselves were not in possession of it.

The question we had in mind was precise and concise, can you see them? With this question we began to think about a solution that would give associations greater visibility and citizens easier interaction with them so we developed "Filo-Rosso" which means red thread and it is a metaphor of connection.

To respond to our question we began researching the associations and noticed that some of them were not very visible to the citizens. First of all, we analysed their websites, their method of communication and the information that was available. We noticed three main issues: the lack of basic information on some of their websites, insufficient updating, and the dependency to social platforms as they lack the skills, time or budget to create their own website.

Our research also involved observation on location. We noticed some actors had great visibility with big signs of their name and good window display sizes, nevertheless others were really difficult to find, even using google maps.

To summarize, some of them had a good website but it was difficult to find them in the neighbourhood, and others were well visible but had little information online making it difficult to get in touch with them.

A particular case was the association "Donne Nissà". We had difficulty in locating them and when we contacted them they confirmed that other people had difficulty in finding them as well. For that reason, we came to the conclusion that Filo Rosso should take special care of these particular cases using already existing infrastructure that will be painted red to help guide the citizens more precisely.

Finally, thinking of continuity,  we hope to inspire the implementation of this project or the idea of it in a collaborative effort between the actors, or as we like to call them community creators, and the Civic Center.