An online platform designed to connect people through their shared food stories and cultural exchanges such as potlucks and food tandems, intended to break down barriers, share knowledge, embrace diversity, and discover commonalities.

Once you visit Don Bosco, it is quite evident that it is a neighbourhood with a multicultural fabric, a melting pot of cultures from various parts of Italy as well as far-reaching areas of the globe such as Africa, Asia, and the Middle-East. One may wonder how these cultures combine to make up one small section of the city of Bolzano. It can be isolating to migrate to another region or part of the globe, striving to assimilate as well as cling to your own traditions and cultural identity. While walking through the streets of Don Bosco, one begins to wonder. ​How can isolation be overcome? What unites us as humans? How can we create shared experiences? There is no better way to connect people than food or better yet a shared meal.

Culinary traditions are a strong part of our cultural background and heritage. They are part of our ancestral history, our personal story, our identity. ​Insalata di Bosco’s online platform was designed to connect people through food, but more specifically the sharing of recipes, food stories, and memories linked to food. ​It is not only a collection or archive of these recipes and stories, but a way to encourage dialogue and create a space for cultural exchange not only in the digital realm, but also in the physical world​. Through food tandems and multicultural potlucks, organized through the site, ​Insalata di Bosco, enables the sharing of cultural knowledge while creating shared experiences with a strengthened sense of community and inclusivity.

The Research and Design Process​
With the concept of isolation in Don Bosco as our starting point, we began by brainstorming how to connect people and strengthen their sense of community. ​Coming together and sharing a meal is the most communal thing you can do in almost every corner of the world, especially in Italy, where food plays such a major role in society. ​Through food we are able to share our culture and heritage. With this in mind, we decided to focus on isolation as a barrier while using food as a means of connection.

Knowing that Lotto C has a large number of elderly inhabitants, we started by focusing on ways to connect them to the greater community. Historically, through grandparents and older relatives, familial recipes are passed down to younger generations. This passage of cultural knowledge has become more difficult in modern times, when families typically live not only in separate houses, but oftentimes in different regions entirely, which is the case for many living in Don Bosco.

With the initial goal of connecting the elderly community through food and the exchange of family recipes, we decided to compile a collection from the inhabitants, with the intention of then creating a co-created community recipe book. We began this process by creating a flyer and questionnaire which we then distributed on foot throughout the neighbourhood, talking to people and visiting local shops. As outsiders to the community, this also functioned as a sort of observational research for us. In the end, despite getting positive feedback and a few in-person responses, this method was perceived to be a failure. It was hard to engage in a meaningful way over a short conversation or “project pitch.” People were generally enthusiastic, but then when asked to participate, writing a full recipe over a short period of time, proved to be a bigger task than anticipated. If given, responses were repetitive or too short, without much detail or substance. Even though participants were given several ways to return their responses at a later time, none were successfully returned to us. In addition, the onset of another Covid lockdown, made it even more difficult to reach out to these elderly inhabitants in-person. 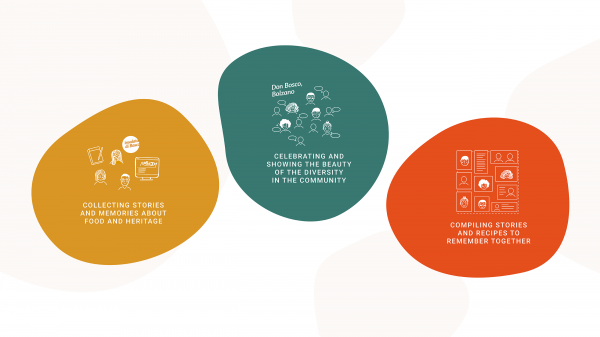 These combined challenges led us to re-evaluate our process and pivot to a more feasible method of execution. After shifting from the goal of a recipe book to recipe cards, which could be more easily expanded and distributed, we quickly realized that an online platform would be a sensible starting off point before any physical book or cards. This method would enable us to communicate more systematically, reaching larger groups of people faster, as well as open up the project to the younger population and immigrant community.

Deciding to use instagram as a means for design research, recipe collection, networking with actors, and connecting to the community directly, we reached a turning point. After close evaluation of the handful of responses and testing the questionnaire ourselves, we also decided that questions needed to be simplified and available online. Stories about food and interactions with people proved to be much more interesting than the generic recipes we were getting back. Furthermore, stories and memories around food seemed to create a deeper connection and level of engagement. We began reaching out to the community, not only for answers to our simplified google form, but also by asking for short videos where participants would describe a meaningful meal or memory surrounding food. This proved to be a much more successful method of contact and a way to share the project throughout our newly created network. We also connected with actors such as Bolzanism Museum and CoolTour, who promoted our project among their followers. As our network increased, we also started to receive videos from notable participants such as Malik Diallo, a refugee from Conakry, Guinea, who is an active member of Don Bosco, and holds the title of Vice President of the immigrant consult in Bolzano. We were also asked by Mercoleté, a local podcast by CoolTour to do an interview and discuss the project in more detail.

With our video and data collection under way via instagram and new simplified google form, we were able to envision the future of the project more clearly. We began developing a website, mapping out all of our participants and their personal stories. With these elements in motion, we could finally start developing the recipe book, which was part our initial concept, however now modified to include personal stories, sketches, and information about the Don Bosco neighbourhood dispersed throughout the book. 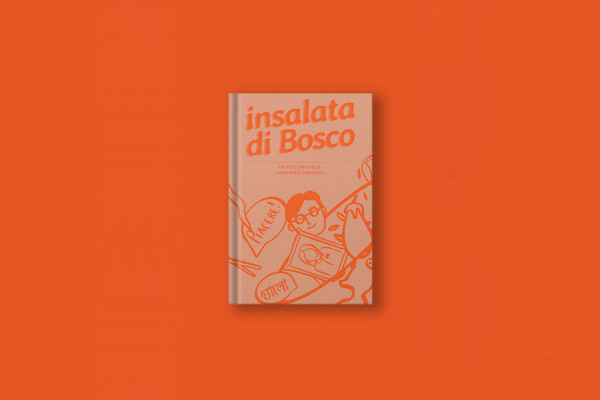 Finally, aside from the collection of stories and recipes, and the online platform, we wanted to bring people together in the physical realm. We decided to plan a multicultural or “melting potluck” event where
people would gather and bring a dish from their culture to sit at a long communal table or “Tavolo Lungo.”

Since food is where families come together, where friendships form, where ideas come alive, the event would be a way to connect the whole community in a thriving, fun atmosphere​. Smaller events or interactions could create more intimate connections between residents, such as food tandems or a small hosted event where a volunteer cooks for a small group of people. ​Insalata di Bosco believes that making food together, opens our hearts to each other. It is about not only sharing stories, but also coming together and sharing a meal in person, allowing us to create new experiences, find commonalities, and embrace or celebrate diversity.