This project invites people to interact and offers space for sharing in public space. We want to give new value to the benches in Don Bosco while respecting physical distancing and promote social interaction in a playful way.

The current situation forces us to rethink our cities and the way we perceive their spaces and functions. LUOGO COMUNE was created with the aim of proposing new ways to allow a community to interact in public spaces, share emotions during the pandemic, reducing the feeling of isolation and loneliness – symptoms of the pandemic we are experiencing.

The project proposes 4 types of interactive objects to be connected to Don Bosco's benches. Add-on elements that enhance this urban furniture are at the complete disposal for inhabitants of the neighbourhood.

The first station we designed is our TURNING TABLE, a versatile communication tool for interacting in safety. 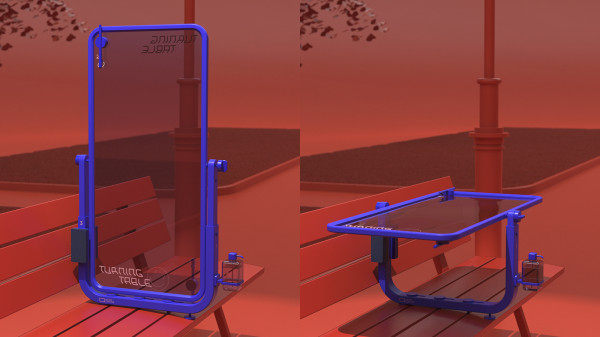 It transforms according to the Corona regulations and is fostering a playful time together. Either it is a wall that invites people to draw or play together or during softer regulations, it transforms to a table that respects the distance. 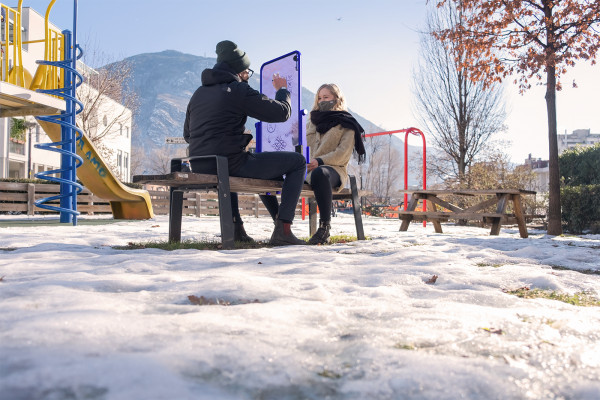 The MOODY BENCH is our neighbourhood jukebox: Different stickers are attached to plenty of seats placed in a circle that we found in Don Bosco. Each has a QR code to scan and corresponds to a collaborative playlist on Spotify where you can listen and add songs. By taking a seat that suits your current mood, you can rest and feel the community feeling while listening to the Don Bosco playlists 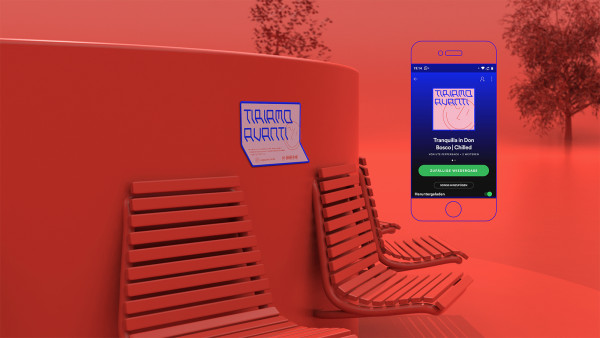 The HAPPY BOX shares happiness, therefore is strengthening the community feeling and is improving one’s own mental health. Because doing good, does you good. It invites passengers to write an anonymous happy-task or -message to someone of the neighbourhood. For every card you feed the box with, you get one in exchange. 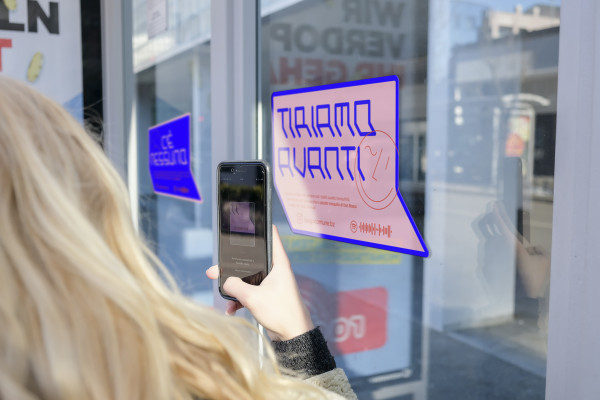 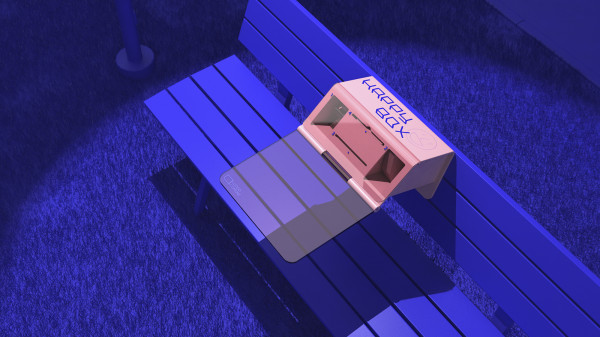 Last but not least, our TALKING BENCH invites people for a chat with a friend or a stranger. By asking questions about our thoughts, anxieties and hopes, people can reflect together in uncertain times and share plans for the future. It is attached to the bench’s lean and forms like a book behind the people that sit here, which is metaphoric of exchanging stories. The sheet between the users is keeping the needed hygienic distance. 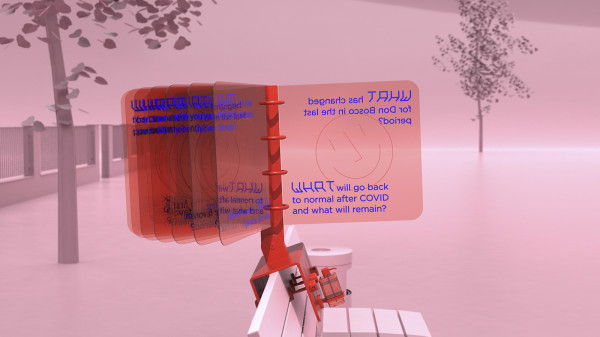 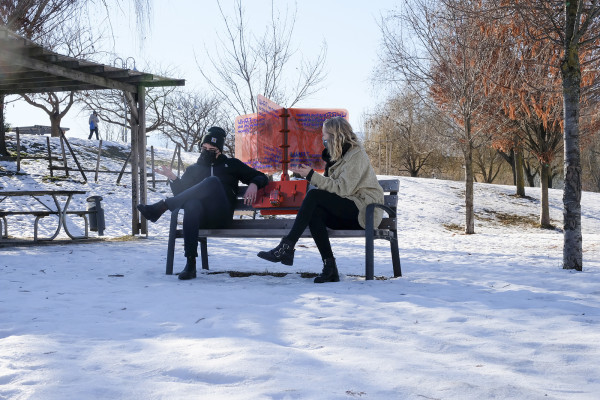 The Research and Design Process

The Coronavirus and the resultating lockdown dominated not only our research, but the entire world. This made it difficult for the whole semester to get closer to the neighbourhood and its inhabitants. But also Don Bosco was affected by the necessary but nerve-wracking Corona rules. While researching the effects that Corona has on our mental wellbeing, we realized that people lack opportunities to get in touch with each other.

Within an online future workshop, we went through different virus-impacted future scenarios with personas from Don Bosco. We realized that right now the feeling of loneliness and isolation spreads and the only social interaction takes place in a digital space - a space that is not available for everyone. But now it's more important than ever to process what happens and listen to each other’s experiences and struggles.

While observing the neighbourhood we realized that the public spaces are deserted – and the offered public benches aren’t used by the neighbourhood. We continued with intensed brainstorming in online sessions on how to make use and take advantage of this urban furniture in order to create objects that enrich the public spaces, not only in times of Corona. Also what was important for the project partner Officine Vispa, that our urban furniture should be flexible by making it attachable and removable in different places.

While conceptualizing different ideas, we created prototypes that we tested within the neighborhood of Don Bosco in order to obtain feedback from the inhabitants. These testings showed us which aspects of the project we needed to continue working on. Based on observations of the prototypes and people's behaviour, we realized that the location of each station is very important and influences the usage rate of the objects.  Benches in public places like playgrounds or bus stations, where people spend time anyways, could help break the burden of trying out the different elements. Besides this realization, we also came to the conclusion that the visuality of the objects should catch the attention of the passing pedestrian.

Based on these findings we finalized our products in CAD and created a colorful and striking communication around our objects on social media. On one hand in order to create attention but also to inspire people to reflect together on feelings and futures.

At this point, however, it must be said that we cannot be sure that our project will actually be accepted and used by the residents. Sometimes the idea, no matter how good, inviting and interactive, may not be enough for people to actually use it.

To conclude our research, also while looking at the further development of the project in the future, more testing phases as well as interviews with the citizens of Don Bosco could be helpful to find out more about the interest of the people about our project and the usage of our interactive objects.