Elections pass, but what are you doing to care for your neighbourhood in the meantime?

Salotto Don Bosco seeks to shed light on the existing pathways for participation and political engagement between citizens from the neighbourhood of Don Bosco and their local representatives. It is a space for co-creation of new strategies and for mutual exchange; where citizens and local actors of the neighbourhood share experiences and find common visions around a selected topic.

The goal of this project is to sensibilize citizens and civic services about the potential of their role and strengthen their relationship in the long term by setting a precedent for ongoing communication. Salotto enables citizens to take part in local decision making by bringing them closer to their representatives to identify opportunities together, therefore building the ground for successful community-led initiatives.

On the 8th January 2021, citizens and members of the neighbourhood council gathered virtually at the Salotto Don Bosco to share their visions for the community during and after COVID times. The participatory workshop provided a frame for discussion and, through moderation and facilitation strategies, resulted in interesting parallels between the council and the citizens. 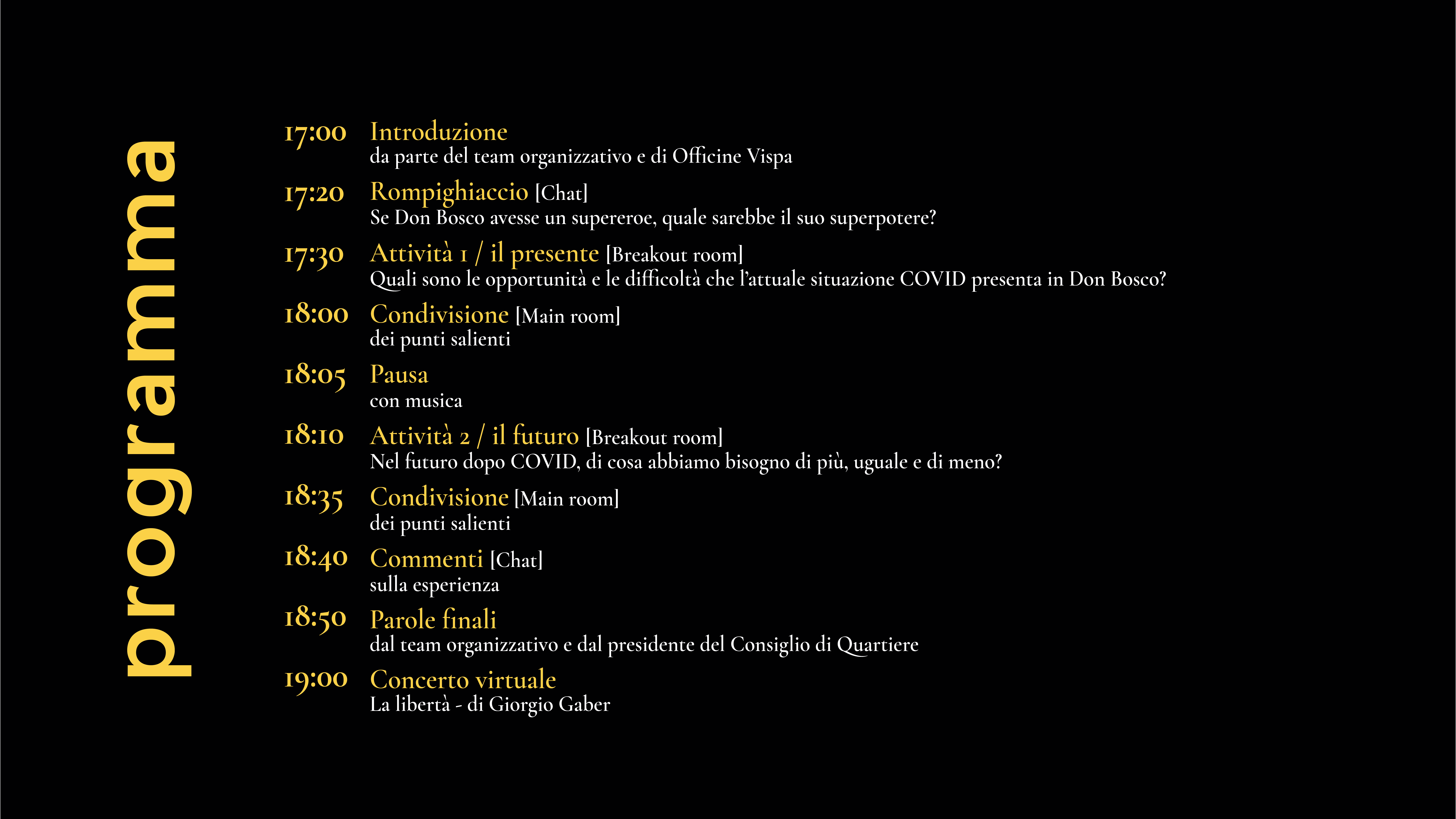 Program: The planned program for Salotto Don Bosco showing the schedule of activities.

Apart from creating obstacles, COVID was understood as an opportunity to raise awareness about community needs and stimulate local participation. This experience also sparked interest in making such meetings recurrent. Our next steps include sharing the outcomes of the event with participants and also a manual with tips, ideas, and lessons learned from this project. 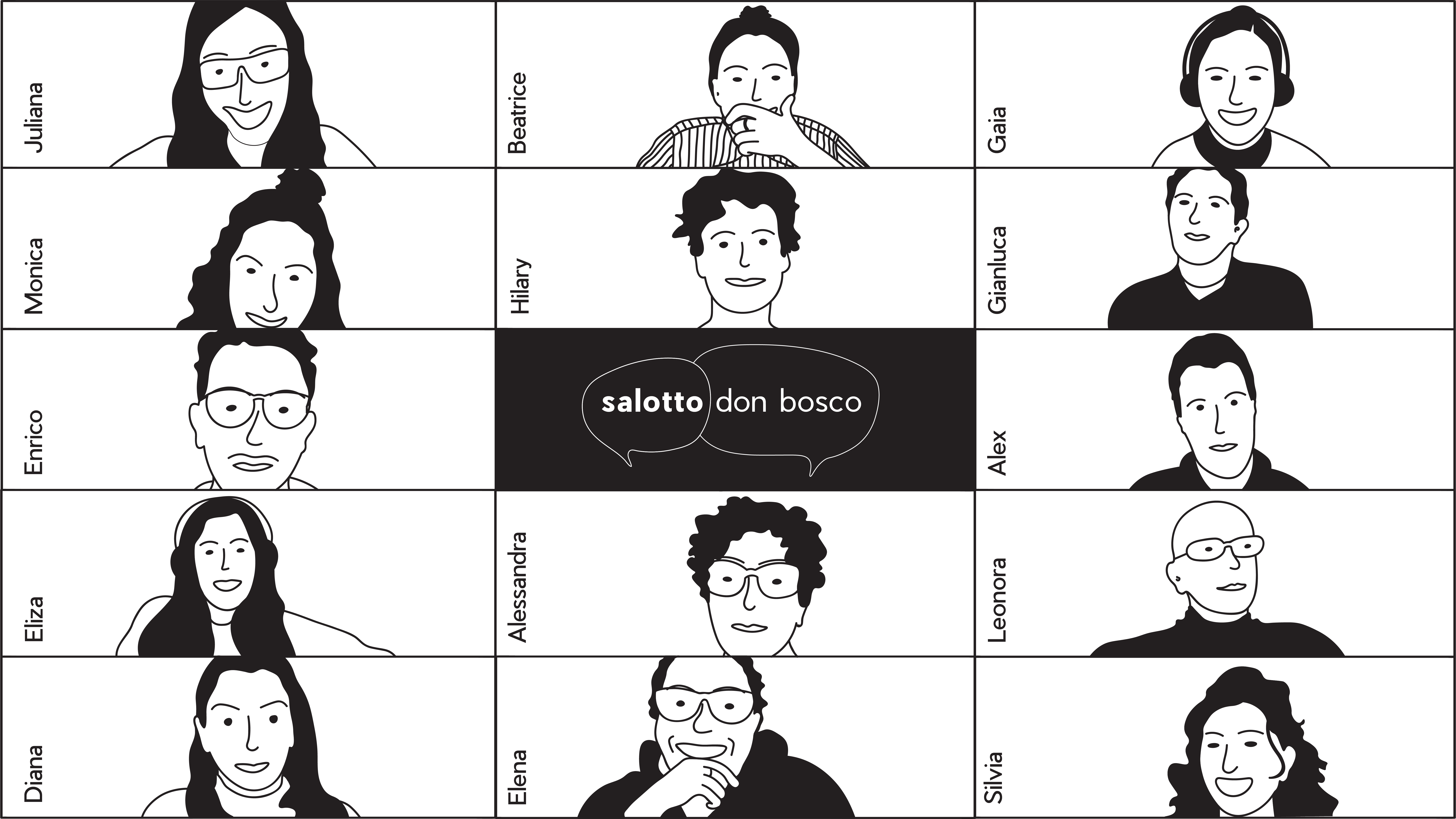 The participants: All of the participants in Salotto Don Bosco including organizers, the moderator, the facilitators, the citizens, and the members of the council.

The Research and Design Process
Our main matters of concern for this project regarded politics and participation. On a neighbourhood level, the Civic Center is meant to be an institution that gathers feedback from citizens and connects them to civic services. However, it has generally been an underleveraged resource, resulting from and exacerbated by its perceived lack of power. Additionally, the neighbourhood council (Consiglio di Circoscrizione) does not have much direct interaction with citizens whether by email, phone, or during their meetings which are open to the public by law, but underpublicized. Therefore our goal was to investigate how to stimulate further political participation, facilitate community thinking, and show the potential of the Don Bosco network.

At the start of our process, we conducted desk research to better understand the political framework of Bolzano and where the Civic Center fits in. The overall Transforming the City by Care project was funded by the office of the Assessore del Comune, Angelo Gennaccaro, which inherently places our project in a political context creating an opportunity to intervene. After recent elections, his new competencies as Assesore include “Participation” and “Community development” and one of the goals of his party's platform, Io Sto Con Bolzano, includes decentralizing more administrative services in civic centers, transforming them from a political tool to real administrative centers: “l’amministrazione sotto casa!”.

Additionally our primary partner, Officine Vispa’s, main mission has to do with community development. Conversations with Gianluca and other members of Officine Vispa helped us to better understand the context of citizen engagement in Don Bosco since they have direct contact with the administration and the citizens. We learned that organizations and associations such as Officine Vispa, are ascribed the informal role of “stimulating participation” by the Commune. 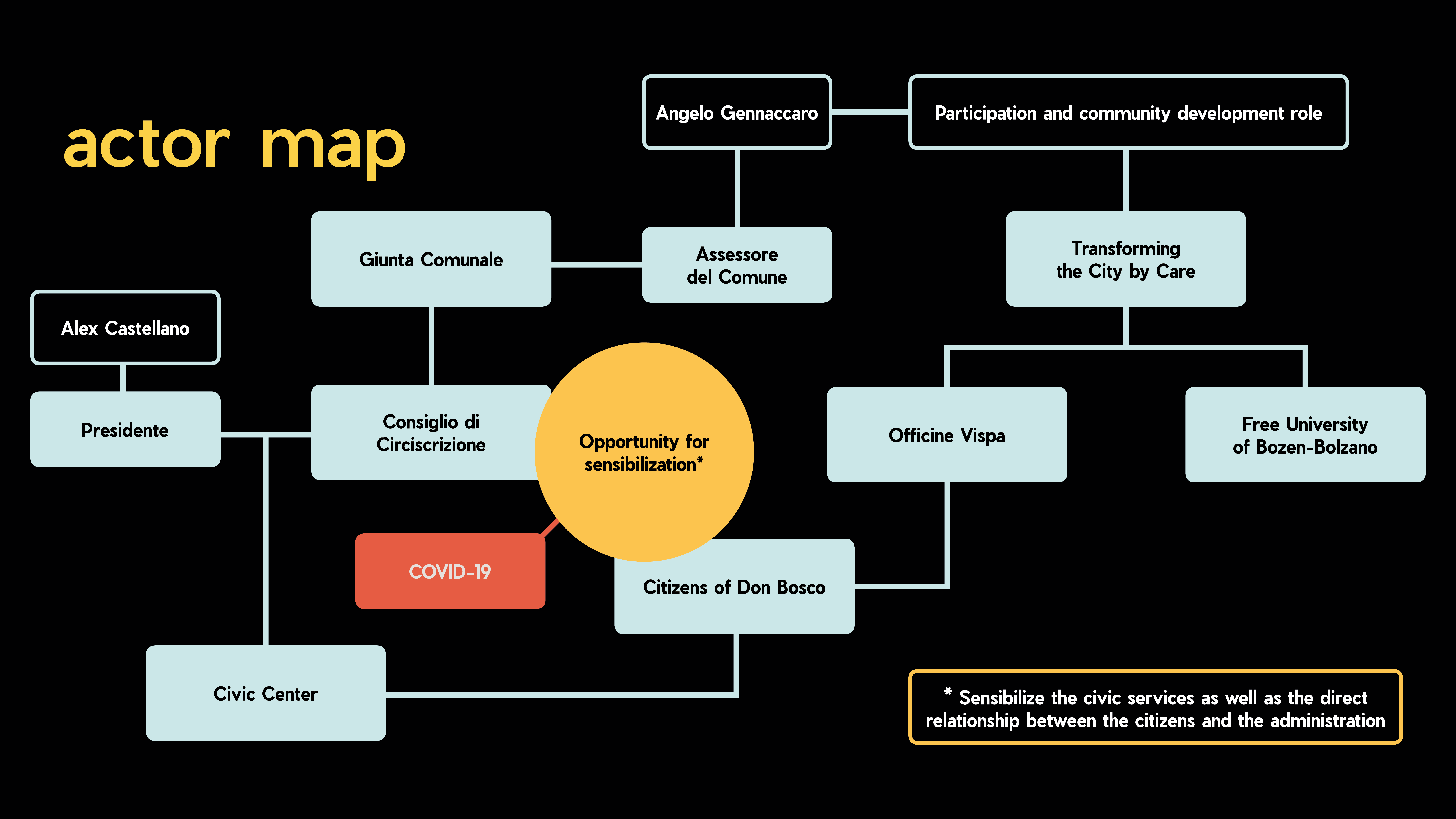 We took inspiration from political participation initiatives around Europe and the US and were such as one from  New York City called “Uptown Chats”, meetings organized by the We Act organisation, where citizens and local representatives come together to discuss topics related to environmental justice. The last “Uptown Chat” was hosted virtually due to the pandemic.

The regulations in Bolzano also required us to plan Salotto Don Bosco virtually. We saw COVID as an opportunity to test out virtual tools and we also chose it as the topic of discussion for our Salotto prototype event since it is highly relevant and provides a context to reinvision civic life. We also attended a similar event happening (virtually of course) in Bolzano called “Conflict Kitchen”, hosted by blufink. It was essential to our research to see how they adapted the “world cafe” format to be online. The booklet they created also provided us with a clear example of how to follow up with participants after the event and how to communicate the outcomes of the discussion. Additionally, we reached out to other organizations and individuals that were already tackling political participation in Bolzano, such as lab:bz and a doctorate student from unibz. These exchanges provided relevant inputs to help us better define the goals and frame of Salotto. 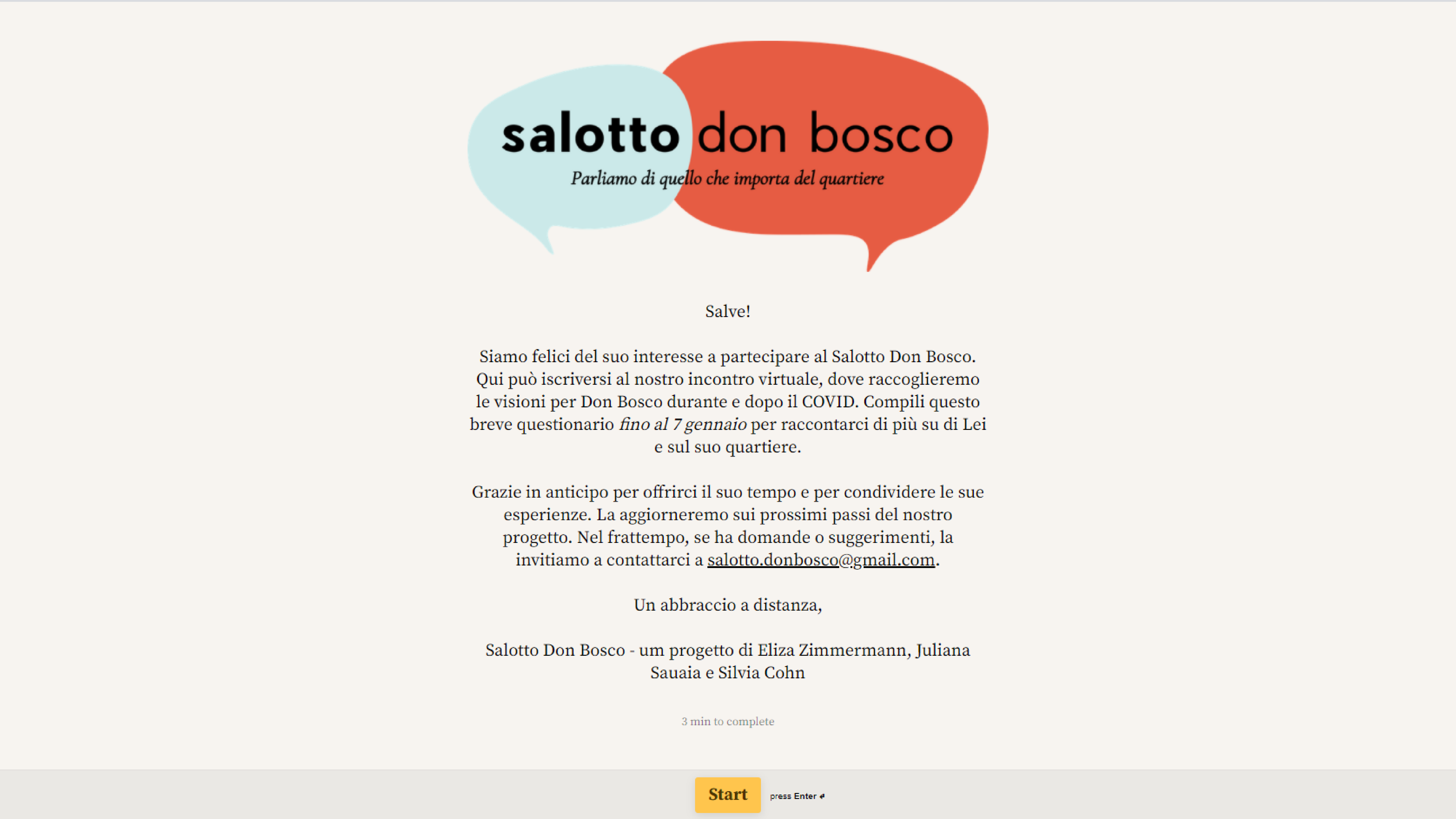 We invited citizens through an online survey that meant to gather more information about the status quo of participation in the neighbourhood, to serve as a warm up for participants to start thinking about the COVID topic, and as a registration tool for the event. The results of the survey are published and have been made available to the Civic Center.

Officine Vispa connected us to Alex Castellano, the president of the Consiglio di Quartiere, who showed excitement about the idea and expressed a desire in continuing online events to encourage more direct participation. He also pointed out the need for the Civic Center to learn to use digital tools and take better advantage of them while serving the neighbourhood. Through Alex we were able to invite the other members of the council while Officine Vispa invited citizens.

On the 8th of January 2021, three members of the Consiglio di Quartiere and four citizens participated in the Salotto Don Bosco. The event was mediated by Gaia, a professional moderator for the Conflict Kitchen as well as a member of the Don Bosco community, and facilitated by two of our Italian-speaking classmates. Gianluca represented Officine Vispa and its partnership with unibz. Both Gaia and our professor for Moderation and Participation, Sabina Frei, gave us input that helped refine the format of the Salotto beforehand. After an icebreaker activity, participants were divided in breakout rooms to discuss the present COVID situation and the future. We decided to have a room with the council and another room with citizens to avoid any power imbalance, followed by the opportunity for them to exchange insights in the main room after each activity. It was interesting to see the parallels when they shared what they had recorded on the Miro boards. 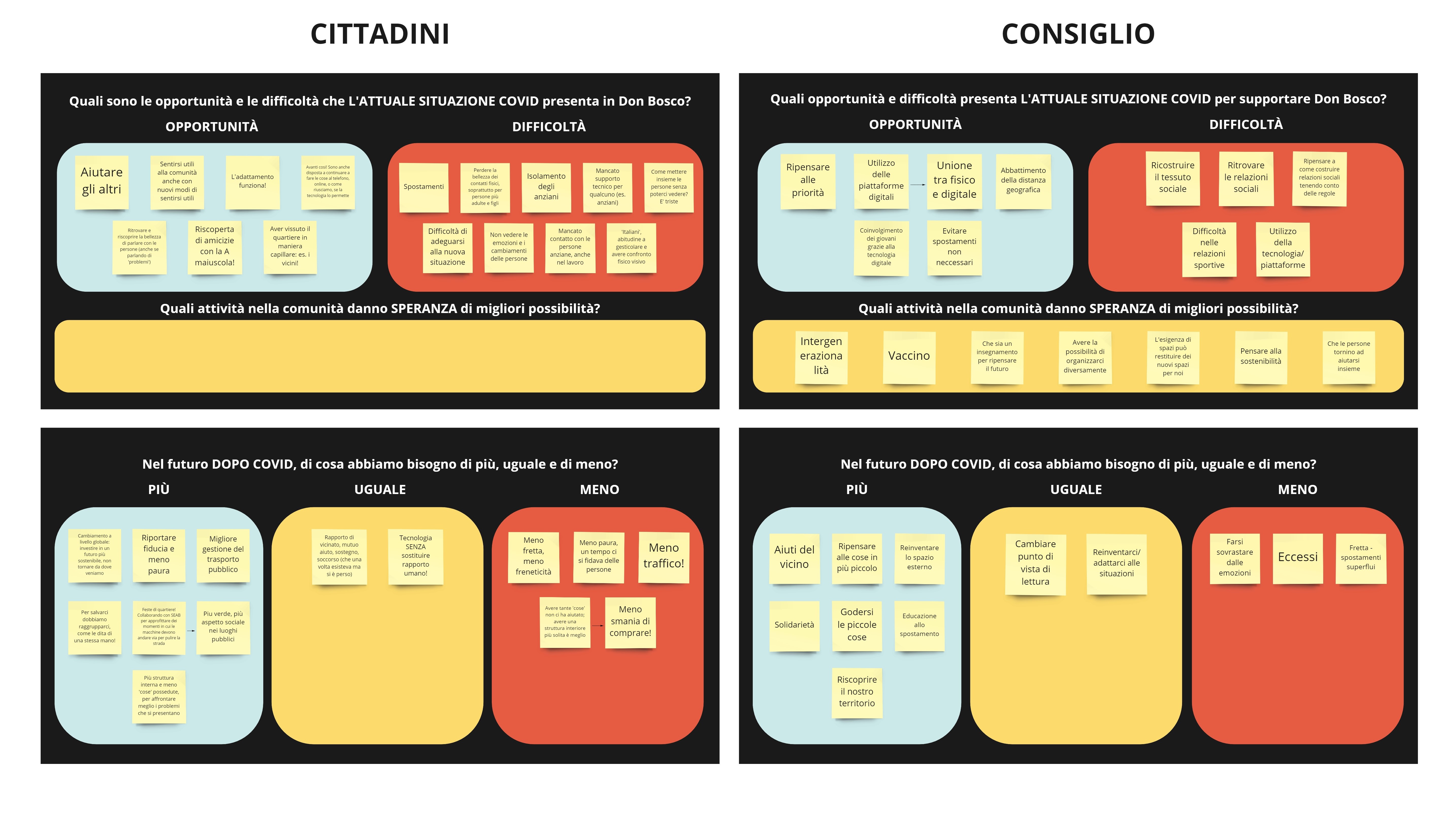 Miro boards: Miro boards showing the templates we designed and the results of the discussion during Salotto Don Bosco registered on the sticky notes.

We hosted Salotto Don Bosco using Microsoft Teams and used Miro boards to document the discussion. Teams seemed to be a more accessible platform since participants could join via a link and did not have to download the software. However, in compromising with the browser version we had to overcome some technical challenges. The Miro boards were managed by the facilitators using templates that we had designed.

Working with few participants allowed us to test our concept in a manageable way. We got very positive feedback from participants, particularly by Alex Castellano, and they showed interest in both organising and participating in future Salotti. One of the most important accomplishments of this experience was breaking the wall between citizens and local representatives as well as showing the potential of technology to bring people together, even in difficult times. Nevertheless, there is room for improvement in the planning and implementation processes to make sure the selected topic can be discussed more in depth and lead to more concrete outcomes.

Based on the experience from Salotto Don Bosco, we are developing a manual with tips, ideas, and lessons learned to serve as a support tool for the community of Don Bosco (and beyond) when organizing their own Salotti. We are still in close contact with Alex Castellano regarding how to better serve the community and provide more opportunities for direct participation, possibly through future Salotti. The manual, as well as the results of the survey and of the event, will also be shared with all of the participants in order to follow up with them and show appreciation for their involvement. 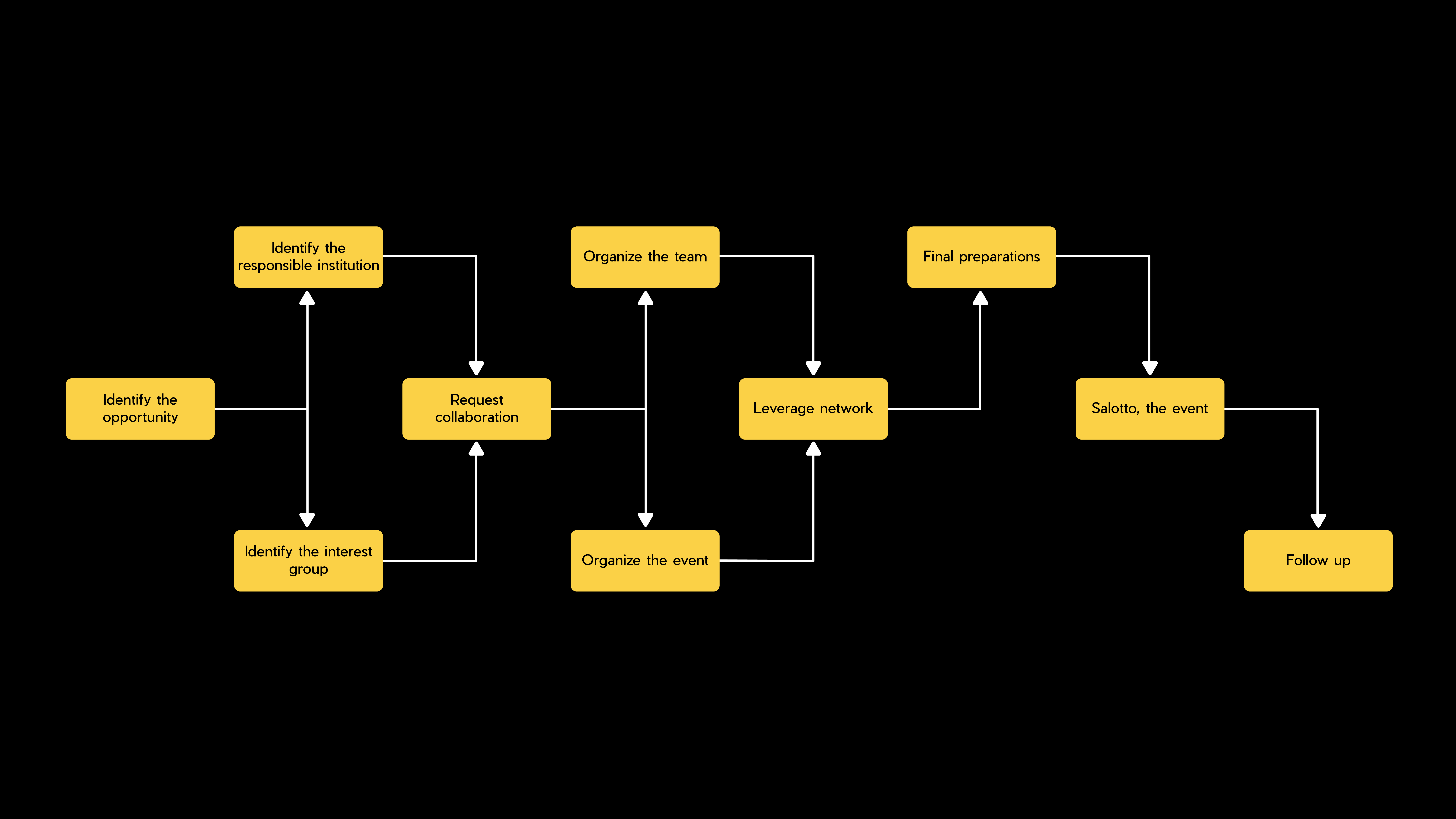 Manual (level1): This manual shows the main steps of thought process behind organizing a Salotto. 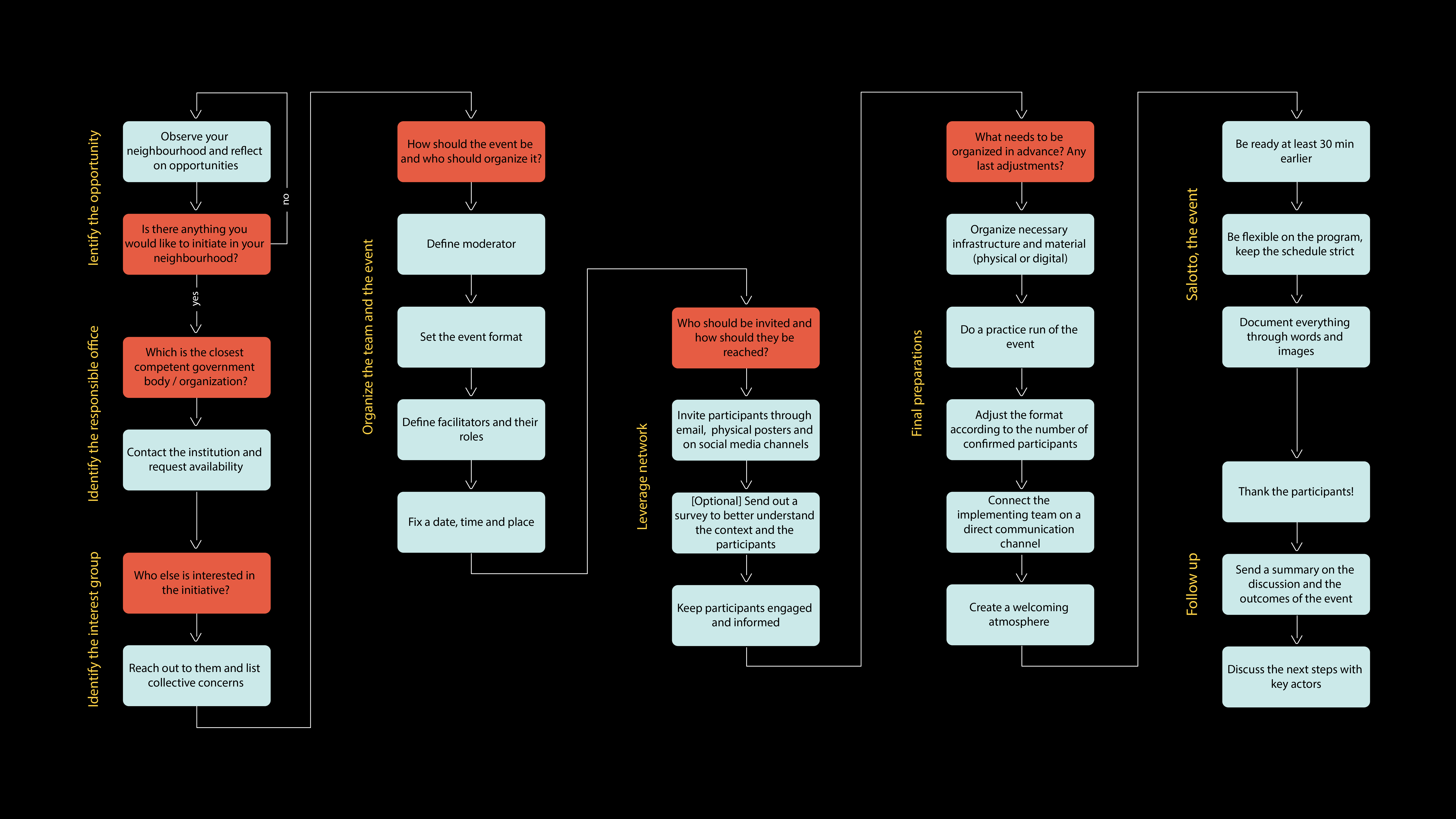 Manual (level 2): Here they are described a bit more in detail.