The Idea Machine is an easy-to-use interactive tool that helps teams to collaborate, self-organize, and find solutions for the concerns of their communities. Step by step, it empowers each team which uses it to identify a shared problem in their community and realize its solutions.

The Idea Machine is intended to function as a self-supporting project development tool that can be used by any group of committed individuals. It supports the work of the Sustainability Network in South Tyrol who are touring through the region to find volunteer groups in over 50 villages. The groups’ aim is to implement the goals of the United Nations SDGs on a local basis through creating self-organized, sustainable projects within their communities.

Together with our partner, the Network of Sustainability in South Tyrol, we want to empower  sustainable transformation in a regional context. For this reason, we've combined structure and innovation with creativity and activistic-purpose, ultimately aiming to guide people with an interest in creating their own sustainable projects toward real change. Our foundational idea is to provide a tool that helps participants to develop projects independently, keeps them motivated, and organizes their workflow throughout the entire process.

The Idea Machine is structured in three phases, leading the teams through a total of thirteen steps of project development which feel tailor-made to their context. Each of these phases prompts teams throughout their own project development experience, with the guidance of analogue tools like game cards, stones, and physical activities (pantomime, for example).

First, the Vision Phase inspires team building, topic finding, and common goal defining. Second, the Idea Phase fosters concept creation and visualization through prototyping. Finally, the Action Phase guides the team through reflection of their project development process and ends in the creation of a clear Action Plan. The Idea Machine consists of ~75 Cards, two mapping posters, and a Machine Tower. This Tower guides the teams throughout a visualization of the development process, while displaying the most important aspects of the project along the way. 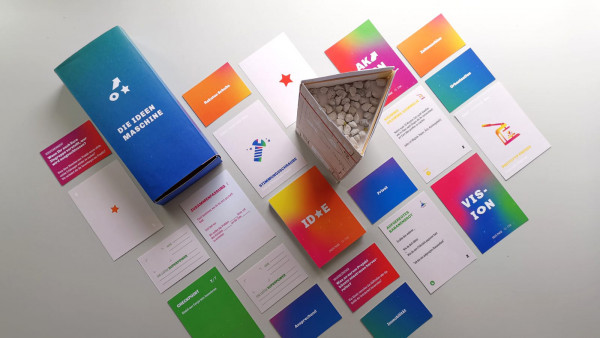 The Research and Design Process
The goal of our partner is to implement the values of the United Nations Sustainable Development Goals (UN SDGs) in a regional context. During the summer of 2021 this partner is touring throughout 50 villages in South Tyrol with the aim to connect volunteers through so-called “Climate Circles”. These Climate Circles consist of ~5 people from each village, who are interested in creating purposeful and sustainable projects for their community. The necessary resources to support 50 villages, each working independently on projects of their own, makes it difficult for the Network team to moderate and support all members simultaneously. This considered, The Idea Machine creates a support system for both the Climate Circles and the partner.

Our development started with general topic finding at the beginning of the semester. Beside our broad research, we used multiple design methods to inform our direction, like Stakeholder Maps, User Journeys and Interaction Flows. Through shared brainstorming sessions, as well as weekly meetings with our partner, we also exchanged a lot of thoughts, knowledge and expertise in between our group. These assets helped us to gain much valuable information in a short time. Furthermore, a co-design workshop, which we held together with our partners, was a really important turning point during our concept phase. The purpose of the workshop was to collaboratively determine our common project goal.
Following the initial research phase, we continued with ideation and prototyping. We created a variety of different prototypes with a focus on increasing the engagement of people to become part of the Climate Circles. During our field ethnography at one of the village tour events, we discovered that our prototype was not working, due to physical restrictions in connection to the corona pandemic. After this discovery, we further observed four events to get a better understanding of the procedure and the general behavior of the participants. Through redevelopment, as well as critical reflection and feedback about our own process, we landed on the concept of our card game. 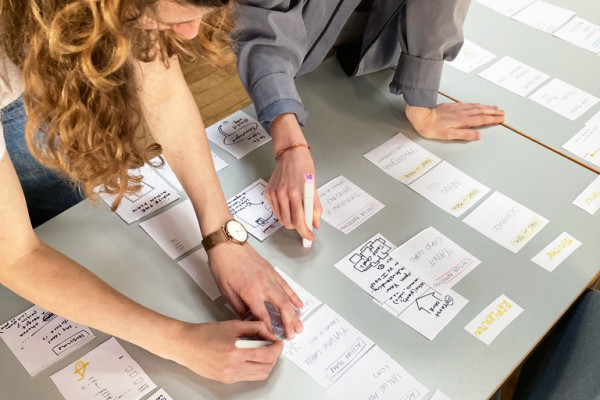 Our development process went through multiple forms of iteration, as we explored various ideas with our partner and the overall research. As our initial focus was centred around igniting a spark or interest in the minds/hearts of the participants of the village tour, we began developing interactions and artefacts which would be used in the physical space, potentially inviting the participants to make a step of action in the first moments of each event. Some of these ideas included:

The first intervention we carried out was a simple provocatype to explore the possibilities of the finger-dyeing artefact. This was facilitated at the main entrance of the university, placed atop the book-dropbox, provoking a response from passersby or students entering the adjacent doors. The artefact was made up of 3 different coloured bottles of hand sanitizer, all held in a cardboard enclosure, and a sign above the enclosure which read “What are you doing in class today?”. Each sanitizer bottle had the response to a general question allocated directly under their respective pump: 1. “Prepping for cum laude”, 2. “Doing other homework”, and 3. “Sleeping”. Those who interacted with the hand sanitizer bottles were then given the surprise of having their hands dyed a distinct colour, depending on their choice of response. The three colours: red, blue, and green--and the questions alike--had no direct correlation to the topic of our partner project, but instead aimed to elicit a response on a human-to-artefact level within the context of an educational institution. 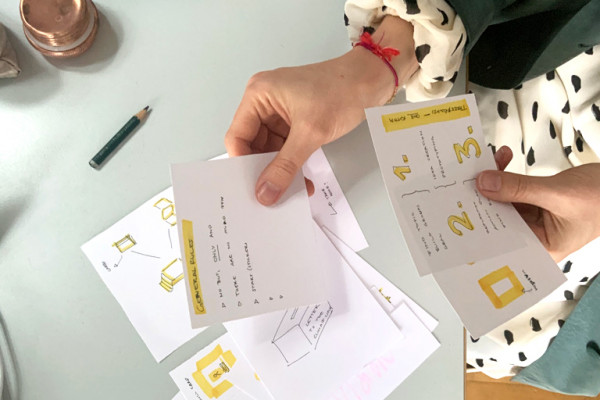 During the first visit among the village tour events, we conducted a simplified combination of the interactive wall and workshop table concepts. Posters with direct and clear questions, prompting the participants to identify one of the UN SDGs which stuck out to them the most. They were then prompted to write the number of that SDG on a sticky note and place it on a poster which corresponded to the question. A second poster was present at this intervention, asking the participants to write (on sticky notes) various wishes they may have for their community. Some of the questions which prompted the participants were: “What is missing in your village?” and “What do you want to stand up for?”.

Our third exploratory intervention, which is still ongoing, is the development of a series of “spirit stick pens”. The aim of these pens is to evoke a more horizontal power structure within community engaged conversations--in this context, at the village tour events--while simultaneously supplementing the limited interaction available due to corona pandemic physical restrictions. In short, these are oversized (~30cm in length and 3cm in diameter) wooden pens which are ornamented with upcycled/recycled materials that display various themes from the SDGs. For example, to evoke the theme of Goal 17: Partnerships to Achieve the Goals, a light bulb entangled with multicoloured wires is fastened to the top of the pen. This ornamentation is a visualisation of Goal 17, whilst being something interesting and enjoyable to interact with at the event, used for notetaking  or simply for fun.

Failures come naturally during the idea finding process, which was something our team wasn’t a stranger to--in fact, we welcomed this part of the process at the start of the semester, with some relatively small failures. To name a couple, while testing our hand-dyeing artefact, the sanitizer bottles weren’t used frequently enough to gain real insight. Correspondingly, those who did interact often reacted negatively to their then coloured hands. In addition, while creating a workshop table with engaging questions to collectively work on different topics, it was clear that our concept was too complex to find application in the planned context, after simple testing of individual elements.

After our problem finding, an extensive idea finding and prototyping phase ensued, with a broad foundation from our collection of small failures. This foundation made a clear direction for what the main project focus would be. During this process we focused on how to engage and motivate people during the village tour, so they would start their own Climate Circle(s) and commit to volunteer for the concerns of their community. Additionally, we planned to collect problems and themes to work on while touring through the villages. Our biggest failure during this project was when we went to the first climate tour event, with a final project idea in our heads and prototypes prepared to test it, and learned the reality of how the corona pandemic restrictions had such a strong impact on the way that the participants could interact in the spaces. At this event, we also understood that there was no need to motivate people, because they were already highly engaged members of their community.

This key failure resulted in our biggest turning point, as we realized we were working in the wrong direction and had to realign our focus. We got the chance to rethink our goal, and clarify that the main problem was instead to keep people engaged during the process of the project development itself, to bring their different experiences and skills together, and to provide the group with structure, moderation, and a plan to keep them motivated through simplification of the work process.

Looking back, we are happy that we went through these various stages, because it resulted in the important key decision to build a tool to simplify their process of project development and to find solutions for an independent community.

After this decision was made, successes followed during our multiple test events, and through discussions with partners and professors. We received both positive and constructive feedback, all of which was very concrete and increased our confidence in the functionality of our idea--the game. After the game was successfully played by the first Climate Circle group last Friday (June 18, 2021), we are happy to have tangible evidence that we created a tool which actually empowers people to make change independently. Receiving this feedback at this stage of the process was highly beneficial, as we were previously working amidst the tension of not fully grasping how the phases of the game would be played in their full sequential order, as this is something which takes roughly six hours to complete and wasn’t able to be tested before this past Friday.

Future Visions & Next Steps
The Climate Circles just started last week, and we are happy to see The Idea Machine being played by the people it was developed for. We are using the first couple Climate Circles as test groups, asking them for feedback to develop the tool even further, and edit unclear parts before we produce 50 copies of the game--as requested by our Partner. Similarly, we are happy to say that The Idea Machine will therefore be played by over 300 people in South Tyrol as it guides them and their communities toward sustainable transformation. Considering the scale of its future implementation, we have not yet decided how to publish the game, as we hope to benefit from the reach of the machine brought by the collaboration with our partners to spread it further. As we are content to say, we are already planning to make another 40 units of The Idea Machine available for a school project in South Tyrol, starting next year, and are therefore looking forward to continuing to work on and with this tool.
As a vision for the future we are also considering how to collect the outcomes that are generated with the guidance of the tool. We see opportunities to collect records of the outcomes, share them, and reflect if our tool guides projects along the direction it is built for, and then spread these outcomes as a new source of shared inspiration for others. 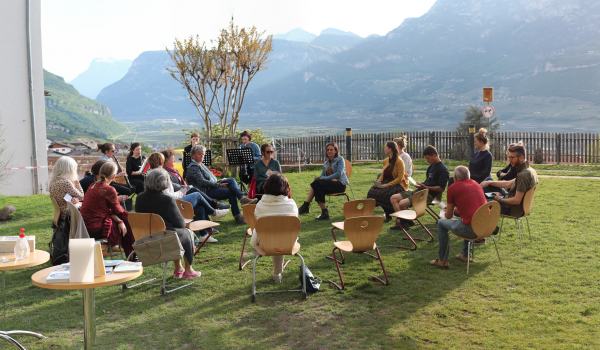