The idt. Toolkit. Making The Interdependence visible by creating tools that help tell the story of those who practice it.

Everyone is a practitioner of economies of care in their own way. This diversity of economies represent how we make our livelihoods, with who, and with what. By practicing interdependence we acknowledge those with which we share our livelihood and understand that our survival and wellbeing depends upon each other and on the planet. The idt. toolkit reveals how practitioners are already caring for their interdependent relationships and their commons. For those who have community economy initiatives it helps them to further formalize their process and make it more accessible to others who want to learn from their practice. 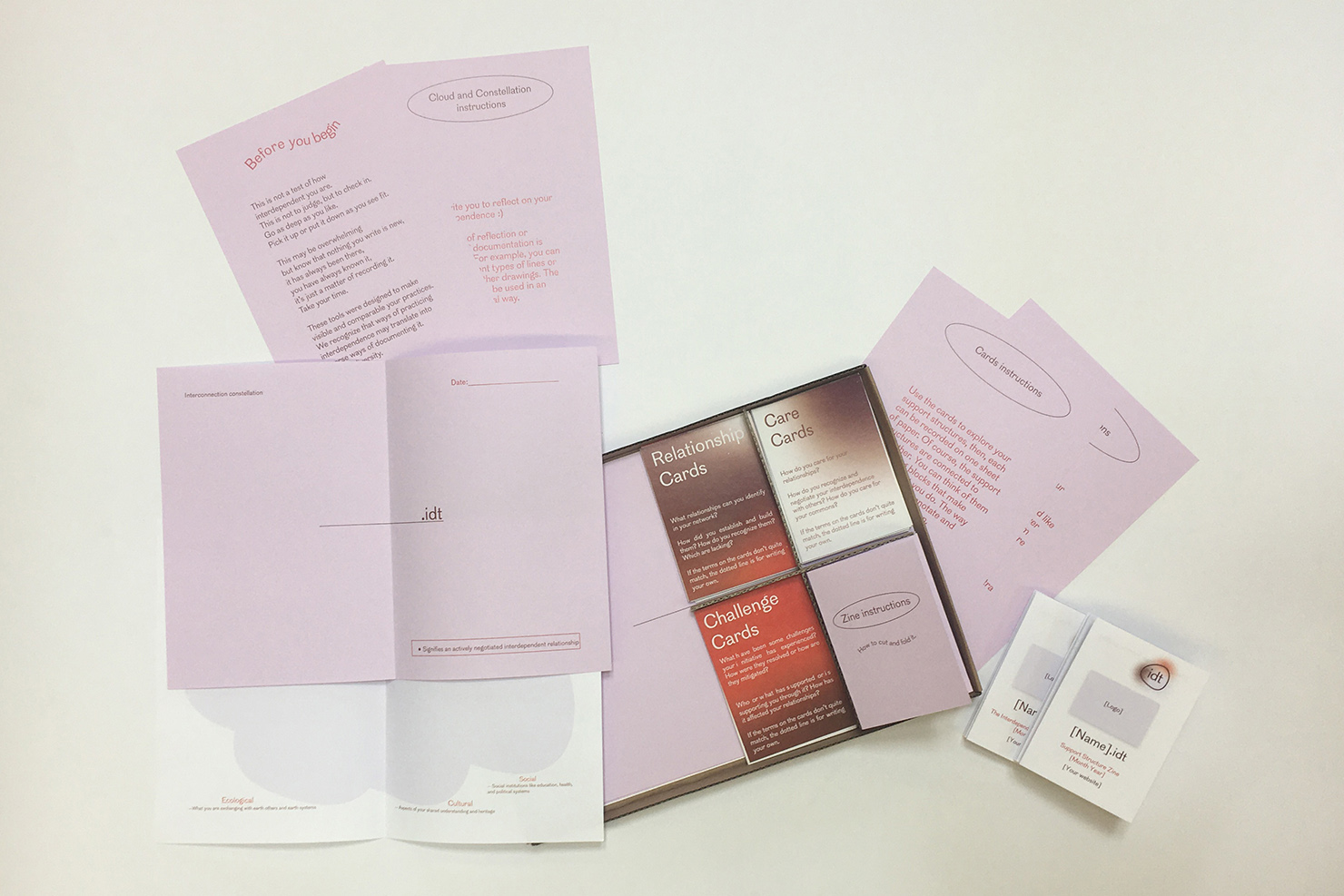 What is in the box? Interconnection Constellation, Commons Cloud, Cards, and Zine templates.

The idt. toolkit was created to help members of The Interdependence communicate and compare their work with other members and beyond. The Interdependence (idt.) is a multi-local alliance between community economies initiatives.  Community economy names the ongoing process of negotiating our interdependence. It is the explicit, democratic co-creation of the diverse ways in which we collectively make our livings, receive our livings from others, and provide for others. The idt. exists to make visible and support people and organizations who are practicing community economies worldwide. Recognizing their interdependence with others and being part of a larger movement to create economies that have the well-being of people and the planet at their core

To become a member, there is a sign up form on the website. After filling it out, the process of turning tacit knowledge into explicit knowledge can begin. Members are invited to voluntarily use the toolkit to help explain how they are interdependent with others, how they care for their commons, and how they build and support their relationships. The toolkit can be used in a self guided way or through an interview with another member. The benefit of joining The Interdependence is to learn from each other's practice and the tools help  to support each other's process. The toolkit also helps make the diverse practices more comparable by giving a similarly laid out overview.

The members are already able to populate a zine with the content from their member profile on the website and the template provided in the toolkit. In the future, we foresee members meeting up for workshops, exchanging conversations facilitated by the tools, and seeing the potential of having something on hand that can quickly explain the complexity of their practice.

After joining, the toolkit would be made available to the members as pdfs that they can print and use (all the tools are A4) and as templates that they can edit online (in Canva). It is recommended to start with the Interconnection Constellation, then the Commons Cloud, then the Cards. They can be picked up at any time as they also serve as a check in tool. Some things to keep in mind…

This is not a test of how
interdependent you are.
This is not to judge, but to check in.
Go as deep as you like.
Pick it up or put it down as you see fit.

This may be overwhelming
but know that nothing you write is new,
it has always been there,
you have always known it,
it’s just a matter of recording it.
Take your time.

These tools were designed to make
visible and comparable your practices
We recognize that ways of practicing
interdependence may translate into
diverse ways of documenting it.
We like diversity.

Keep it complex, make it clear.

The Interconnection Constellation is used to map as many interdependent relationships as you can recognize, which are essential for sustaining your livelihood or community economy initiative. The intention is to become more aware of who and what you are interconnected with, whether they are close to or distant from you. Doing so, helps to become more conscious and responsible in actively negotiating these  interdependentrelationships.

The Cards are more relatable to community economy initiatives, as they are used to explore support structures that make their work possible. Use the Relationship Cards to identify different roles, use the Care Cards to identify how you take care of your relationships, and use the Challenge Cards to identify challenges you have experienced and who or what has helped you to mitigate or resolve them.

Visit our virtual idt. toolkit to take a closer look at the tools, read the instructions, and see an example of how they can be used.

The Research and Design Process
Our main approach for this project was to draw inputs from academic literature as well as from practice, which is aligned with the way our partner organization came to be. The Interdependence and the idt. Charter developed out of the Community Economies Institute and the Community Economies Research Network in June 2019. Since then, the members have worked on the practicalities of idt. as a way of building on a collective desire and need to address ‘the issue of scale’ within their work. The Interdependence (idt.) exists to make their work visible and our project sought to make tools to help accomplish that by telling the stories of those who practice it.

First, we had to understand the context of this work and define what our project would be. Our partner provided core readings including the book Take Back the Economy by J. K. Gibson-Graham, Jenny Cameron, and Stephen Healy and a recording of the launch of The Interdependence at the LiViAnA 2020 conference. From there we drew theory, case studies, and heard how the early adopters of The Interdependence described themselves. Our initial idea was to conduct interviews of the members and design a tool to facilitate them, which could also provide an output to communicate the narrative of their work. That’s where the zine came in, taking direct inspiration from the book, so we started prototyping.

We conducted an informal interview with Fabio Franz, from La Foresta, in which he created a rough mapping of all the actors who are interdependent with them. From there, we ideated some templates for a Constellation and Cloud that could contain all these actors and the commons they share. Once we had the ideas for the tools clear, we met with the extended network of the Community Economies Research Network, including Katherine Gibson and Jenny Cameron, who gave us positive feedback and helped us understand further what direction to go in. Our partners, Bianca Elzenbaumer and Kathrin Böhm, also continued to co-design the tools with us during our meetings.

To further develop the Interconnection Constellation and Commons Cloud, we continued to draw from the literature and the examples we had. We read case studies of initiatives who participated in the Redrawing the Economy Workshops hosted by Jenny Cameron as well as a study done to understand the values incorporated in Research Through Design ( RtD) projects that used cards as a central interview tool that then helped steer peer to peer debate. This gave us a framework for analyzing the relationships involved in a community economy initiative and the idea to develop our own cards. To determine the categories of the cards we looked at the language used to describe the community economy initiatives in all the literature we had access to at this stage, which is how we came up with the Relationship Cards and the Care Cards. The Challenge Cards came from cases in the book Take Back the Economy that provided examples of “critical incidents” which were also described in the Redrawing the Economy workshops.  One of the participants in the workshop created a metaphorical support structure out of clay bricks and showed how when faced with a challenge, likea brick being taken out, the support structure still stood.

At this stage the prototype of our cards emerged and we were able to print them out and start to prototype how they might be used. Inspired by this idea of a “support structure,” we arranged the cards to describe some theoretical examples of different key relationships, forms of care, and challenges involved in a community economy initiative. For example, how volunteers are credited for their contribution or how figuring  out how to register an organization might be a common legal challenge that requires an advisor. These “support structures,” made using the cards, can be seen as mini case studies of best practices and experiences of community economy initiatives.

We took these examples of how to use all the tools to a review and support session with our professor, David Calas, to see if they helped make the concept of interdependence clear to him. The tools resonated with him and the examples made it understandable for him to use the tools to analyze one of his enterprises. From there, we were able to make some adjustments and iterate the tools. 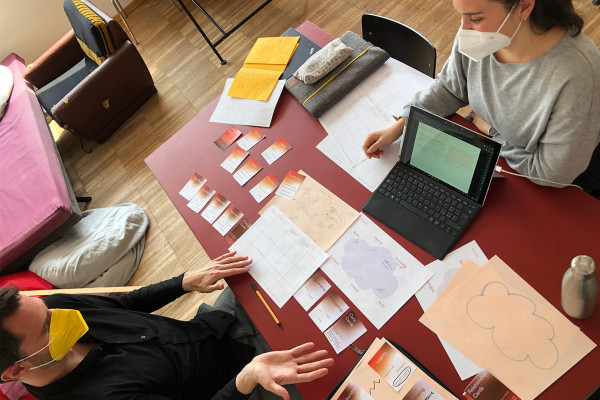 Prototyping the toolkit with Professor David Calas by using it to analyze one of his enterprises.

Recognizing the importance of examples, we connected this project to our design and production course where we realized we could be practitioners ourselves. We developed an object that could be used as a tangible example to communicate the concept of interdependence and could be mapped using the tools we designed. The stamp idt. also represents a symbol of what the idt. could be, which is a replacement for ltd. or inc. to provide a legal alternative for those who want to cooperate rather than compete as economic actors. 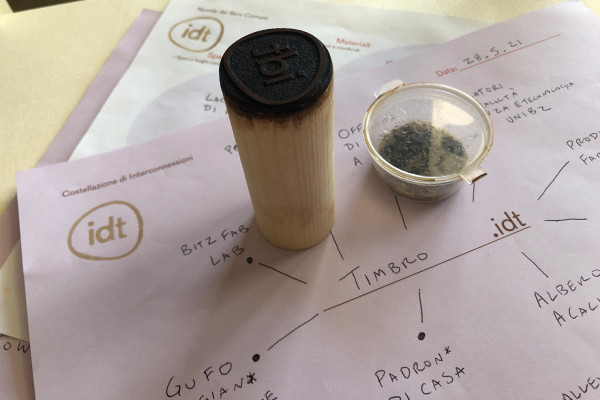 Close up of the stamp idt., an artifact designed to provide an example of how the tools can be used.

Another example of how the tools were used during the course of our project was initiated by one of the members of The Interdependence, Comunità Frizzante. They decided to adapt the Commons Cloud for their upcoming partner meeting to show what they are currently making use of in their initiative and what they might need in the future. The idea was to engage the partners in the mindset of commoning and think about what their role could be. The partners were given blank Cloud templates to fill out on their own time to send back as a “message in a bottle.” 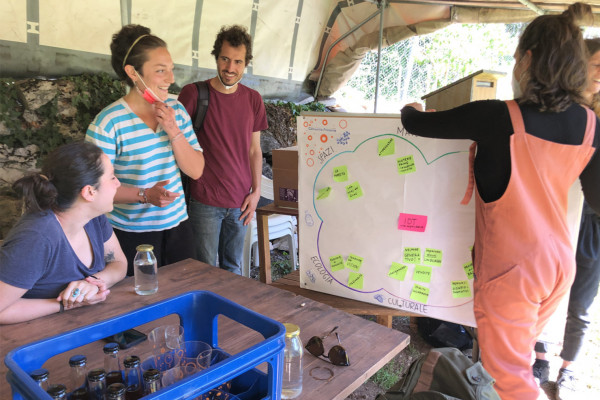 Setting up the cloud with Comunità Frizzante for their partner meeting

Finally, we were able to test how well these tools communicated by creating a booth for The Interdependence at the Rural Commons Festival in Vallagarina.  We adapted the Constellation and Cloud to be used to analyze individual livelihoods, in the hopes that participants would want to do so using the printed templates. At the booth, participants could see Constellation and Cloud templates filled out using ourselves as examples (see the woman looking at them in the photo) and the stamp idt. Nearby, Comunità Frizzante was serving their drinks and their cloud was also hanging on the wall of La Foresta. 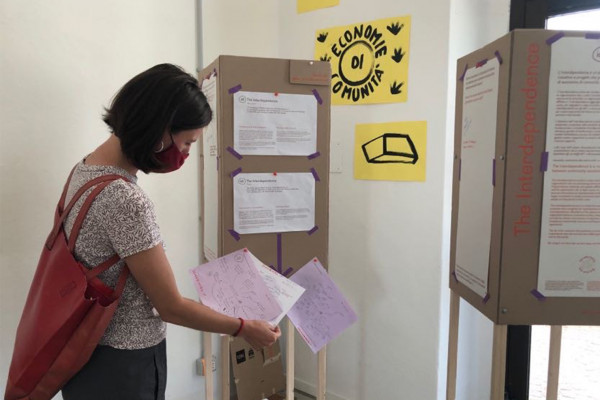 The toolkit will hopefully be available online to download, as we would like it to be accessible to everyone. We designed a webpage, during our web and media course, to connect the tools to the idea of exploring the “pluriverse” economies that exist. The tools are there to help explore it and make it visible to others.

We are all part of the pluriverse already, it's just a matter of exploring our part of it. 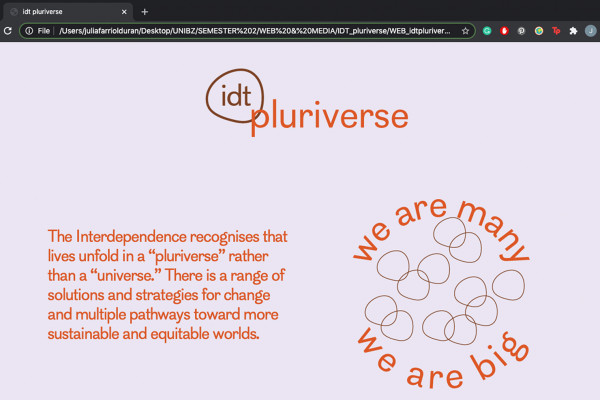