"Piazzati" is a project designed as a provocative dialogue with the aim of activating the potential of Don Bosco’s community to envision and realize the transformation of Piazza Don Bosco.

Piazzati a Don Bosco is an urban development that seeks to envision the future of Piazza Don Bosco through participatory design and research methods. The project's main highlight was to activate a series of stakeholders and citizens by performing an intervention in the public space of Piazza Don Bosco. This intervention was meant to cause provocation and create intrigue by placing a series of boundary objects as representations of our visions for Piazza Don Bosco. Simultaneously, it served as a prototype to gather information from the citizens. The objects, while simple, we're eye-catching thanks to a combination of vibrant colors and center placement in the space. This alongside a question spray-painted on the floor called for reflection in the citizens that led to more voluntary inputs and civic engagement from the people.

Later, these responses gathered were categorized and mapped into themes which later got translated into tags. Tags that represented the elements or functions for the piazza's future. The tags became the basis for envisioning and speculating design proposals, always taking into account the citizens' point of view, the stakeholders involved, and obviously the socio-political context of the space and neighborhood.

Finally, the proposals were created in the form of "what if?" questions and suggestive illustrations that open up the possibilities while showing a clear direction for the future intervention of the space. The project materialized in a summary booklet that will be distributed to the decision-makers of the municipality, the interested actors, and hopefully back to the community with the intention of creating awareness and pressure for future development.

Through participatory and thought provoking intervention, a network of actors, stakeholders and citizens was engaged to create a shared vision for Piazza Don Bosco’s future.

The Research and Design Process
The first task at hand was to know how the neighborhood came to be. We had the opportunity to do this through a series of exploratory walks and bike rides with our partners which allowed us to get a grasp on the current situation and understand the historic context as told by locals. This was also a nice exercise to observe closely the neighborhood's dynamics and people. These dynamic observation rounds gave me and my partner perspective from different points of view.  Basically we had a Piazza that got split into parts after a social housing expansion and that remained partly owned by the entity who constructed it (WOBI).

We also focused our observation on how the people related or interacted with the space itself. We observed a distant relationship with the piazza at first. A place that used to be a meeting place is now just a crossing point. Compared to other iconic spots of the neighborhood, it lacked identity, which was tied to a lack of activity in a sense. This faced us with our first and main challenge: How could we bring back life to piazza Don Bosco and connect what was once lost?

With fewer covid regulations, we decided to execute our research with a more provocative approach. After a series of observations and desk research regarding urban development, we brainstormed ideas on how to gather information from the citizens while creating intrigue. We concluded that a public intervention or “provocatype” would have to take place. Now the question was: who do we want to provoke? What do we want them to think about? 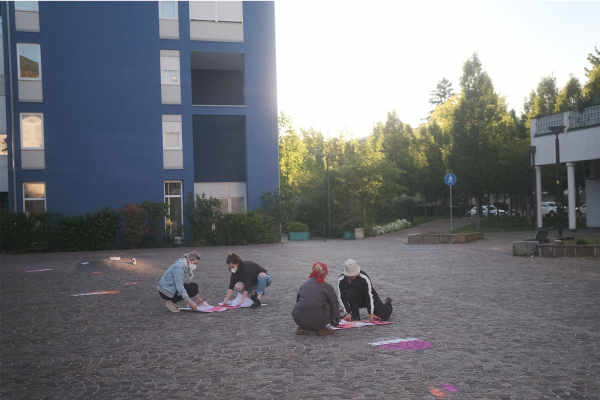 Luckily after understanding the historical and socio-cultural context of Don Bosco, we could arrive at a simple theme: ownership. Ownership not in the sense of property but in the sense of belonging. Do the locals feel “at home” in Piazza Don Bosco? Do they see it as their own? But we couldn't simply ask them directly to the people. We needed to guide the citizen in a way into giving a response. For this, we used boundary objects. Objects that represented a glimpse of our vision as designers for them to not only reflect on the question but also imagine a near future by triggering their imagination. 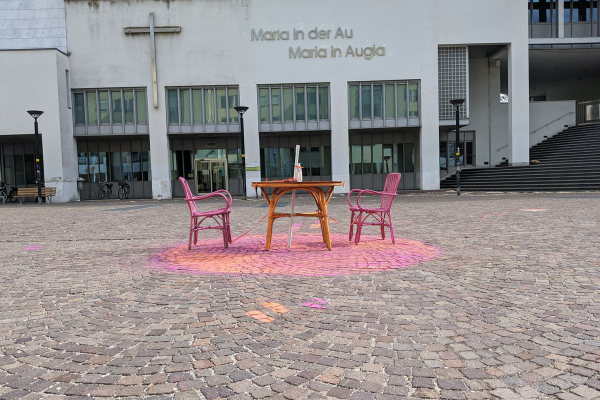 These boundary objects (in the case of Piazzati) we’re composed of a simple table set up, with chairs and a parasol. While they might seem very mundane, in an empty piazza anything can stand out. They are also objects we associate with a gathering or a conversation, and since we wanted to start a dialogue, they seemed to fit our criteria. After sourcing these objects from the Arca della solidarietà association, we proceeded to paint them to match our intervention concept.  This combined with the question: What if this Piazza were yours? spray-painted on the main entryways of the piazza (previously observed) led the citizens to not only reflect during the activity but also arrive at our objects to place their answer. The instruction was open and therefore the results as well. These artifacts helped become the bedrock of the whole project later on. Thanks to them, we had living proof of a participatory process that took over the piazza in an organic way. 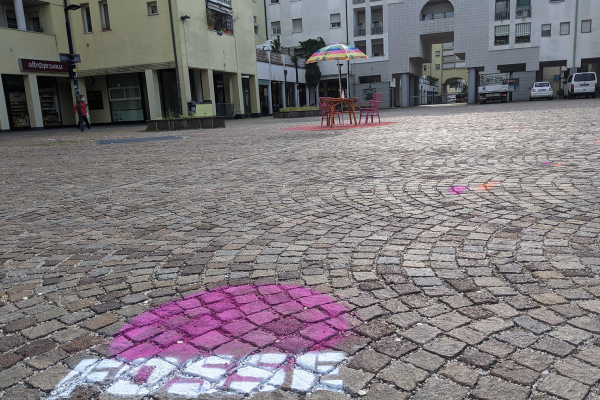 The intervention went on for 40 hours over the course of 5 days. On average we had a 22% engagement based on the amount of citizens that passed per hour. After gathering all this information we came into the analysis phase, which required more interpretation from our side to look below the surface of what the people were saying towards the piazza.

We had a total of 170 ideas that were translated, categorized and  successfully mapped out the common themes and in a cluster map that evidenced the citizens' needs and wants for the piazza. However, they still showed a very vague direction for the future. Reading deeper into topics like “green” or “urban furniture” we could define what they represented as needs for the people but also functions for the piazza. So instead of talking about “ownership”, we could talk about “belonging”, for example. These we’re more actionable or activity-based “tags” so to say and that gave a more clear direction on how to design the future of Piazza Don Bosco. 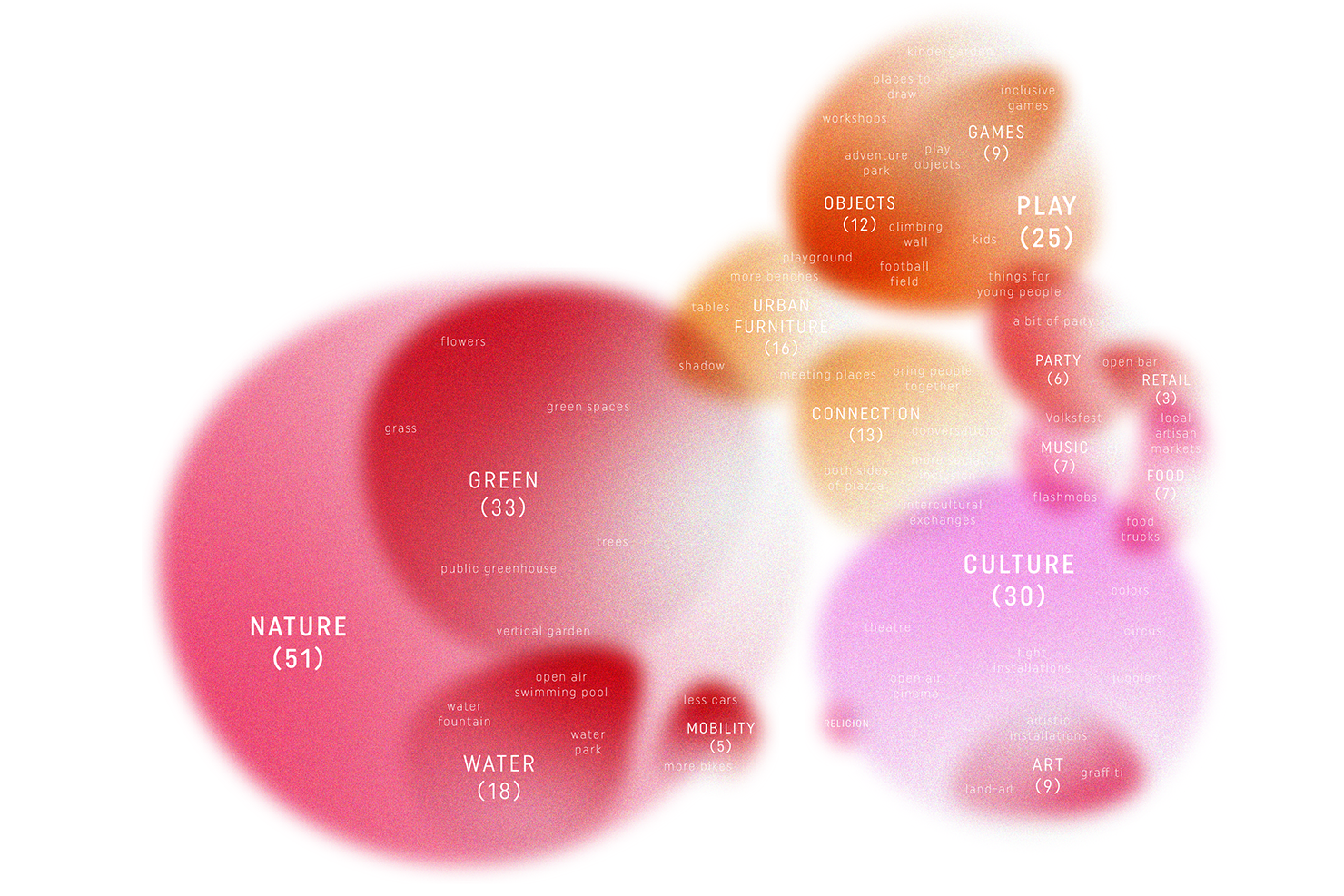 Subsequently, we developed ideas for the future of piazza by combining possibilities with the tags and how they could work together. Our proposals had to be concrete enough to be attached to the context of the piazza but broad enough to leave room for exploration. Here, speculative design approaches we’re required. By introducing our proposals as “what if?” questions and describe them as visions, we create a clear idea of the future whilst setting the stage for further ideas as well. All of these results were materialized in the form of a booklet. A visual documentation of the process and results that could be easily distributed within stakeholders and that speaks a language that anyone can follow. 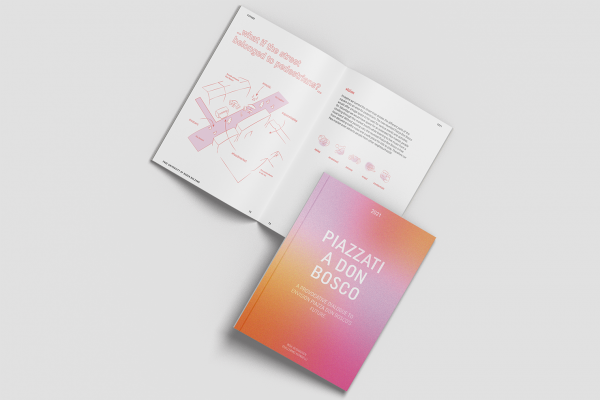 Concerning care, Piazzati indirectly challenges the idea of ownership in several ways. By placing our vision as a provocation tool we manage to plant an idea in the citizen's mind and in a way evidencing how making a place your own is more about believing it than anything else. Once you break the ice and push the boundary of what is considered the norm, people start to slowly see and get inspired for change. By creating a sense of belonging, citizens could take pride and care in the things they consider their own.